Two days ago, all the mobile telephone numbers for the main communications company in Crimea stopped working. As if the entire network had been attacked, the only message was, “Network Unavailable.” Not even emergency calls could be made on the MTC network. This vital life line simply shut down. 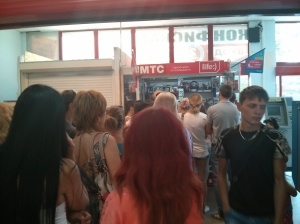 A Rare Small Queue of People Waiting For Numbers

There has been chaos. Every place that sells MTC phone numbers is seeing significant queues, with hours spent standing in line to hopefully get a sim card. Many shops have run out, or price gougers are selling them at up to 50 times their normal cost. Many shops refuse to sell the new Russian phone numbers as financially it is not worth it. A friend of mine who works in a phone store noted, “I make 20 Rubles profit when I sell a phone number, but I pay a 300 Ruble penalty if I make a mistake. I made two mistakes today.” This is not surprising since no one was trained on the new protocol.

But most likely, no one wanted to lose this foremost connection with friends and loved ones. No one wanted their loved ones all over Ukraine to be treated like an international call, with all the additional expense associated with it. The system worked fine as it was. Yet the day it went down, it was like bodies floating in the water after a shipwreck. Everyone was trying to find everyone.

2 thoughts on “We Cannot Communicate!”