I just arrived home from my family and work in Ukraine to see the news on the chaos in Ferguson, Missouri. After experiencing both the protests in Kiev, and Russian suppression in the Occupied Territory of Crimea, I was struck at how America is at its own cross-roads regarding civil unrest and government reflexivity. 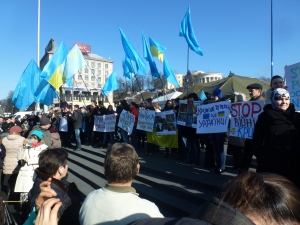 taking in Crimea. With the former, Ukrainians fought for governmental reform and accountability, and, while imperfect, today the new government is working to respond. The “new faces” in government are trying hard to create a just, fair society that is to the benefit of all people.

With the latter, Russia has banned all forms of protest, which it is characterizing as acts of terrorism. As the Washington Post Reports:

“Under the new laws, protesters found guilty of “holding meetings, rallies, demonstrations, marches and pickets” multiple times during a six-month period will be eligible for 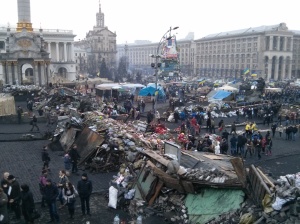 Maidan: The Center of the People’s Fight for Change

Putin also signed a law to increase prison time for people who publicly call for anything that might ‘violate the territorial integrity of the Russian Federation.” Individuals can now receive up to four years in prison, instead of three, while appeals made via media and the Internet can bring about a five-year prison term.”

intellectuals and artists were fired or jailed over protesting Russia’s annexation of Crimea. In addition, Ukrainian Oleg Sentsov, was recently arrested by the Federal Security Service of the Russian Federation (FSB) at his house in Simferopol on charges of terrorism. Reportedly, he has been tortured while awaiting trial in Moscow. He is one of four other artists in a similar predicament.

So, my question to my American brothers and sisters is this: Which road are WE going to chose? After all, America is at its best when it generates itself from the will of the people. We are at our most brilliant when we honestly face our foibles, and reform to the benefit of all. Please, let’s follow Ukraine’s path.