A month ago, in a cold terminal at the Lviv train station, I met a group of soldiers headed to the front line. Some of the older men seemed like seasoned soldiers, with a wisdom 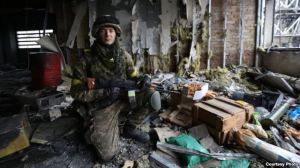 in their eyes that spoke of eons of mustering inner strength. The younger ones seemed far less self-assured, perhaps bracing for a long train ride to a certain kind of hell. But they all greeted me with such kindness and genuine smiles that I practically felt embarrassed. They knew I was American, and the mere curiosity of my presence in Ukraine brought endless questions and vibrant conversation. I was humbled by how much they loved and respected America.

If a brotherhood can be formed over a cup of coffee, I would stake such a claim. They demanded I tell them what I love about Ukraine, which takes no effort. I retorted they should all come to America as American women “love a man in a uniform,” in turn bringing on much laughter. But eventually the cadence of our exchanges slowed as they cannot escape their reality. We all grew quiet as the most obvious conversation was the one we chose to ignore: How the war was going.

As family waited, it was time for me to depart, but I had to show my support. In the worst Ukrainian imaginable I chanted, “Слава Україні!” (Glory to Ukraine!) With focused, penetrating eyes, they all looked at me as if I was their commander, yelling “Героям слава!” (Glory to the heroes!). The chant echoed so loudly through the hall, I felt saddened that they would honor me with such accord. I was not risking my life; they were. I did not have to fight; they did. I had nothing to lose; their losses could be catastrophic. As we parted with hugs and handshakes, I could not help but weep as I turned away.

From the date of this meeting all hell has broken loose. The Ukrainian army woke up to the realization that during this five-month “cease fire,” Russia had been arming the separatists with the latest in military equipment, supplying ample Russian troops to fight with and train the separatists. Russia had completely snubbed the promises she made under the September, 2014 Minsk Protocol. Human Rights Watch noted, “Many of the recent civilian deaths were due to violations of the laws of war, in particular the unlawful use of unguided rockets in populated areas.” The Organization for Security and Cooperation in Europe (OSCE) has determined “the entity which fired these rockets [on Mariupol] knowingly targeted a civilian population,” where forensics show the rockets came from rebel held territory. German security announced yesterday that they estimate Ukrainian civilian and military casualties to be about 50,000 people, which is ten times higher than what Kiev is reporting. Over 1.5 million Ukrainians have been displaced by this war.

No words can fully capture my hatred for war, and my scorn deepens when we consider how war has become an industry – a profit center if you will. We will only heal this world being grounded in peacefulness and stability, and progress as a species will elude us without this. But this situation has forced me to question when a fight is morally called for. Perhaps more important, when do we fight on behalf of others, even if it is not directly in our self-interest?

War, as we know, has not necessarily been seen as antithetical to spirituality. Perhaps the most famous spiritual tale framed around war is the Hindu text of the Bhagavad Gita. As the tale of the Kurukshetra War unfolds, this allegory explores some the most profound challenges of human existence. In this search for defining an ethical life, the ultimate message of selfless action likely changed the course of humanity. If we are grounded in Dharma, the rightness of our actions is aligned with the universe. We live in harmony.

The British scientist and philosopher J. G. Bennett might have argued that war can potentially be seen as a “dyad,” or opposing energies. In this framework, the work is to have opposing energies resolve into a higher understanding or consciousness, if you will. Yet to reach such an aim requires each side to exhibit equal energy and clarity of purpose. The aim is never to conquer, rather to develop our capacity to find a better way. Each side improves.

Ukraine is a long way from presenting equal energy. On Saturday, Ukraine had reached the point of being technically bankrupt, with key banks folding and the currency losing half its value in two days. Ukraine is so poor that it recently had to postpone another round of drafting because there was not enough money to provide boots for their soldiers. Military training is so inadequate that soldiers might not last on the front line more than a few days. Families bring food and supplies to the soldiers, while endless collection boxes attempt to raise money for the war.

What makes Ukraine’s case so haunting is that the fight is extraordinarily clear and simple. Ukraine is fighting for its right to become a healthy, vibrant, and functional society within the boundaries the world has accepted and understood for well over a generation. The situation is that beautifully simple! Do we see Ukraine’s path as one of Dharma, and if so, shouldn’t we bring meaningful support? Can we see virtue in creating a “dyad” with Russia? Can we imagine how not supporting Ukraine weakens our own moral power, both as individuals and as a nation?

What do we live for if not for the chance to fight for a moral consciousness greater than humans have ever achieved?