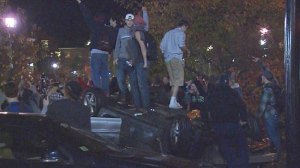 Students dance on an overturned car during the 2015 Pumpkin Riots

In the imagery of New Hampshire, Keene perhaps is not what one considers to be a quaint New England town. It is not particularly wealthy, and the advent of chain stores and restaurants has defiled the remaining Victorian architecture that many consider to be important. It came into being as a juncture. It was a juncture between the French and the English in protecting the Massachusetts Bay Colony. It was a juncture for train travel, opening up new opportunities for southwestern New Hampshire. Keene carried this legacy into the automotive age, serving as the fork between Brattleboro, Nashua, and Concord. But generally, its fate was the same as many manufacturing centers, seeing the beginning of its decline from the Depression era on.

Perhaps what has been an economic boon to the town is Keene State College and Antioch University New England, which together comprise a fifth of the population. Keene State has developed into a strong branch of the state’s university system, and Antioch has tailored its programs only for graduate students. The schools have a very strong relationship with Keene, and a newly formed 2013 commission is serving to further develop this relationship.

For a town slightly over 23,000, Keene has managed to generate a successful cultural scene compared to most of New Hampshire, with the Pumpkin Festival’s 80,000 attendees ranking it as one of the largest events in the state. While its renown – the world title for the most lighted jack ‘o’ lanterns – perhaps is frivolous, the sheer exuberance of the atmosphere is magnetic. Food and music abound, and mix of family activity and plentiful libations always mixed well.

2014 seemed to spark the media’s fixation with riots, and the 2014 Pumpkin Festival got caught up in the sweep. It is a year later, and to be clear, the story has never been clear. Apparently, Keene State College students, local residents, and out of state visitors were involved with overturning cars, destroying street lamps and sign posts, throwing bottles, and starting bonfires. Evidently, thirty people were brought to the hospital for injuries.

Within a day the media dubbed this “The Pumpkin Riots,” leaving ample room for comparison with the tragedy in Ferguson, MO. But, such comparisons only cheapen the plight of the powerless of Ferguson, and obfuscate the dynamics in Keene, NH. The riots in Ferguson bloomed due to injuries of class and race, where the shooting of one more teen unified the angry. The Department of Justice more than acknowledged that the police had become an instrument of inequality rather than justice. While the violence was inexcusable, its rationale was very understandable.

What happened in Keene? While Boston.com suggested two groups of 1000 perpetrated the violence, such reporting was only feeding the frenzy. Eighty-four people were arrested, but 140 were arrested in 2013. While Keene State “vowed to punish any of its students who were involved,” ultimately only two students were expelled and another 168 were “disciplined” to varying degrees. Alternatively, the police department’s strategy of using pepper spray, tear gas, and rubber bullets arguably was excessive and unsophisticated in light of findings from the “Blarney Blast” report involving Amherst, MA police in 2014.

Beyond the statistics is a logic of what draws people into violence. As mentioned, we can understand Ferguson quite clearly, but the dynamics at Keene speak to a far different problem. What challenges our thinking with Keene is people’s fascination with straddling a line between festival and violence. As one non-student put it, “It’s just like a rush… It’s a blast to do things that you’re not supposed to do.” A student from a different school created a blog post charting his enthusiastic adventure over the evening. Photos on the web show people dancing on overturned cars, or congregating around fires that had started. It was a party fueled by the power of ambiguity.

The student blogger mused, “We were rebels without a cause with no place to go.” Beyond the sophomoric use of this phrase, his invocation speaks to a disillusionment with white middle-class America of the 1950’s. Such themes of American existentialist crises are not new, but is this really what is going on?

Perhaps what saddened us most about this event is what avenues youth used to exercise their power.  We cannot deny youth have power; can we claim we are empowering them?

It would have been brilliant if the city council started their investigation from this vantage point, but admittedly this is a tall order. Nevertheless, in April of 2015, the Keene City Council voted 13-1 to reject a permit to hold the Pumpkin Festival this year. This ends a twenty-four year run for a very important, successful event, with no greater understanding of what happened.